Sorry to be a broken record but......continued THANKS to Linda, Caryl, Evalyn, Jon and all who organize, coordinate and make our Zoom Meetings possible.

President Linda D. welcomed everyone.   The Treasurer's Report was reviewed and  it was noted there are no outstanding bills.   More recent Membership payments and payments for the Susan Greening Davis class should be deposited this week.

Membership - If you have not yet paid your dues.......you are PAST DUE.   Dues is $25 annually.  Please complete and return the MEMBERSHIP FORM asap.

2020 Challenge - Patrick has received the note pads for the 25 winners of the 20 in 2020 Challenge.   He will discuss with the Board how to proceed for delivering these to the winners of the challenge.    Patrick received a late submission from Mary Rita who finished 54 pieces in 2020.  Her additional finishes changes the total of completed projects for 2020 to 705 projects from 25 stitchers.
Programs -
If anyone has a collection they would like to share or has an idea for a meeting presentation, please contact Stacy S.
Also in June is the Penn Dry Goods Day at the Schwenfelder Museum in Schwenfelder, PA.   While the market is virtual this year, there is still a good series of lectures that are scheduled.
Linda D. shared two books that might be of interest to members.   A Maryland Tradition - Quilts in Maryland, by Gloria Seaman Allen  and Nancy Gibson Tuckhorn 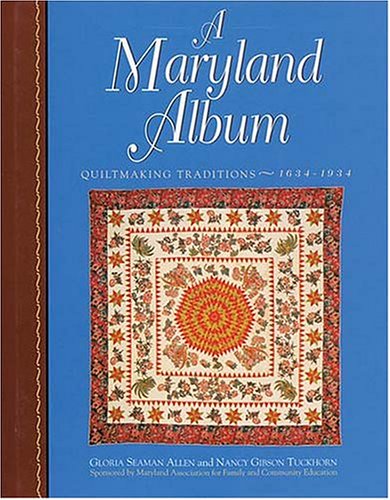 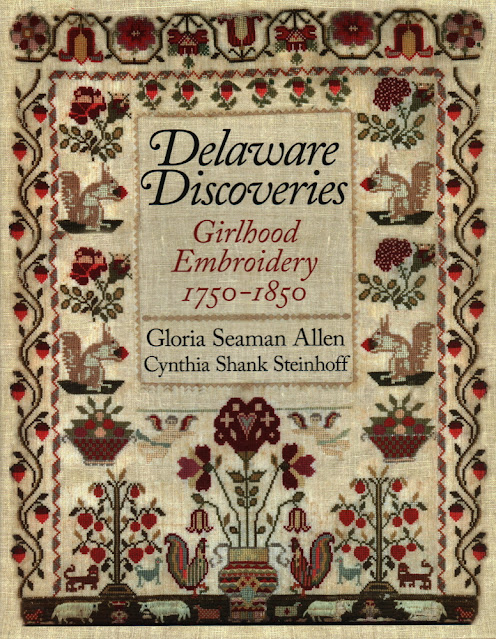 Cynthia Steinhoff comes to DVHSG with a vast resume.   She is a Professor and Director of the Andrew Truxal Library at Anne Arundel Community College.   She collects antique samplers from the mid-Atlantic area, researching the stitchers, schools and their teachers.  She is a frequent speaker at needlework seminars.  She holds a Bachelor of Science degree from Edinboro University, a Master of Library Science from Clarion Universey and a Master of Business Administration from the University of Baltimore.   She is an EGA member, a member of the Loudoun County Sampler Guild and the Annapolis Historical Society.
Cynthia started with a Thank You to DVHSG for our support and donation towards Winterthur's purchase of the Mary Orr Sampler in memory of Gloria Seaman Allen.  The Mary Orr sampler was stitched in 1831 by Mary Orr who was from the Wilmington Area. 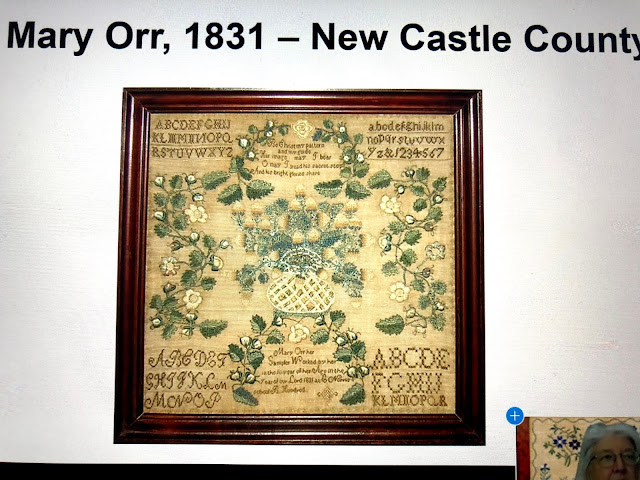 Today's program was entitled, Three Stitchers/Two Towns.  Annapolis, Maryland and New Castle, Delaware.
Although the samplers are not related, Cynthia pointed out that the towns are similar.   Both cities were port cities and both ports were replaced by larger ports.  Annapolis by Baltimore and New Castle by Philadelphia.  Annapolis was settled in 1649 and New Castle in 1651.  Both were early seats of government.   Both cites still have many colonial buildings and homes that still remain. And each had residents that were signers of the Declaration of Independence.
Baltimore, Maryland
Henrietta Maria Hall* was from Baltimore, sampler dated 1827.   The Hall family were among the earliest settlers of the county.   They had a large family having 10 children.  During the 1800's most people married into other families in the same area.  Even if the head of the household was a professional, the majority of the families were also farmers and some of these farms remain in the families and are still active today.  Henriettta was born in (approx) in 1813 and was a descendent of Henry Hall, Reverend of the Episcopal Church having arrived in Annapolis in 1698.  Henrietta was married in 1842 to her cousin, Henry Hall. 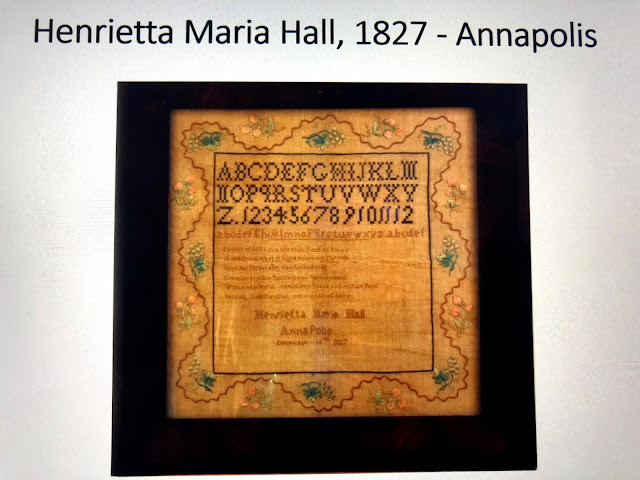 Sarah Sands* was from Anne Arundel County MD.   Her sampler is similar in style to Henrietta's  The similar borders indicate she likely studied under the same teacher as Henrietta but ten years later. 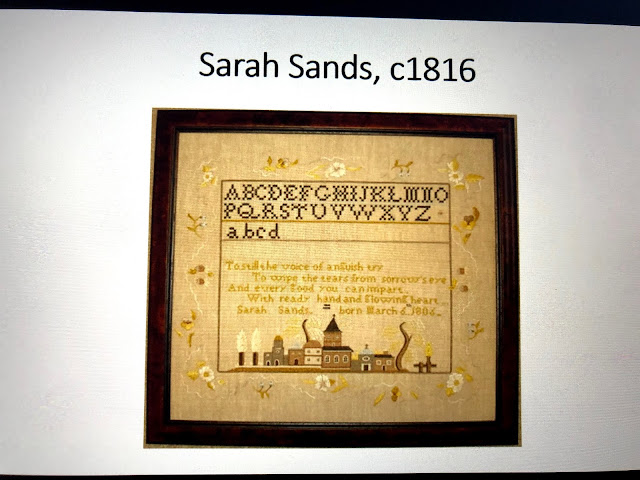 Rachel Sophia Waters* also from Anne Arundel County in Maryland, most likely attended school in Annapolis.  She is related to the Hall (Henrietta) Family both through birth and through marriage.  Her sampler is stitched mostly in cross stitch, with some eyelets.  Rachel is buried in the cemetery started by Henrietta Hall's grandfather, Rev. Henry Hall. 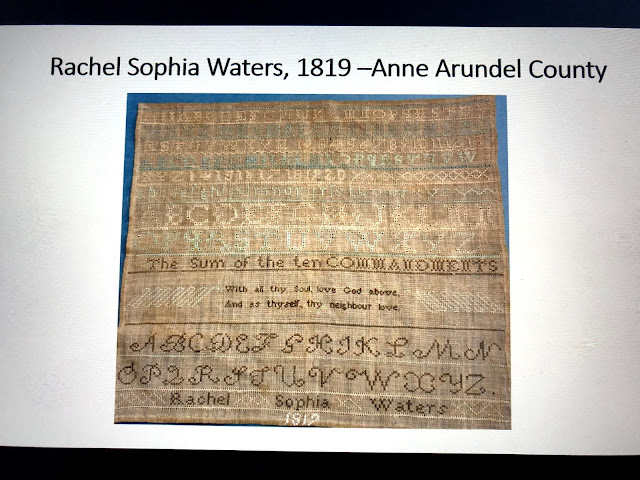 New Castle, Delaware
Dorcas Bolden* was a difficult girl to research.  There are a number of different spellings of both her first and her last name.   Dorcas used a variety of colors and stitches in what is basically a marking sampler.   She stitched the text in black.  What is known is that the Bolden Family left England in the early 1600's settling first in Jamestown, VA.   Some of the family moved north to New Castle County by the early 1800's.  Poplar Hill, in western New Castle County is the family home.

A marriage bond, dated 3/7/1808, between Richard Bolden (perspective groom) and Elijah Bolden (Dorcas' father) pledging that Richard would marry Dorcas as some time in the future has been located and most likely is the same Dorcas Bolden.
Dorcas was probably about 20 years old when she stitched this sampler.  It is very well stitched on a high count linen.   Cynthia continues her research on Dorcas. 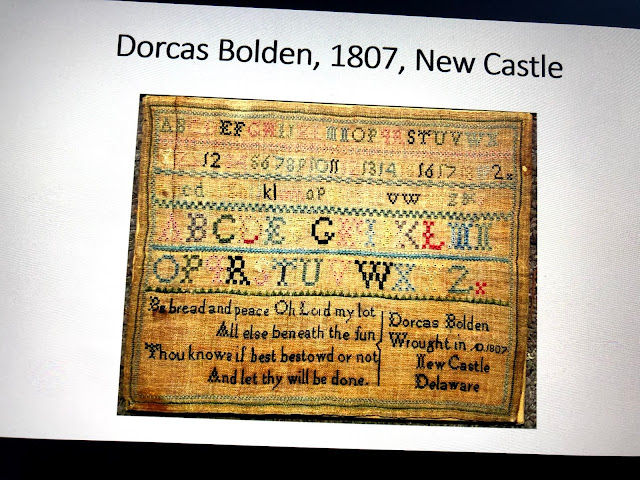 Rachel Wiley, 1815, New Castle, DE.   Her sampler is similar to the Dorcas Bolden sampler.   The layout the same with the verse on the lower left and the attribution on the lower right and the alphabets are very similar.  (No picture available)    Rachel's father was an attorney or a judge and the family left New Castle shortly after the sampler was stitched.  It is likely both Dorcas and Rachel were taught by the same teacher, perhaps at the Deborah Hicks Mundel School.
Cynthia opened the floor for questions and shared her vast knowledge with the group.   She became interested in documentation of samplers in 2011 when the University of Oregon and the University of Delaware worked together to document samples for the Sampler Archive Project.
None of the samplers Cynthia shared at the meeting have been graphed yet.  Cynthia works with both Barbara Hudson of Queenstown Samplers and Patty Yergey of Samplers Revisted for charting samplers.
If you own an antique sampler and are interested in getting it restored, contact a museum for who they use or do an internet search.
Researching takes as longs as it takes.   Early records did not include women's names.  Cynthia always researches a sampler before she buys one.  She uses Google, books on samplers of the era, county records, cemetery records, and compares the works to other samplers of similar style.   Researching a sampler is two-fold as she researches the sampler and the family.  For family history she used Ancestry.com, local genealogical society, online, libraries, archives.     There are free sites for family records and some states are now digitizing the state records on births, deaths, marriages.   Cynthia will let a seller know if she finds out something about a sampler that is other than what the seller may be saying.   e.g. stating the sampler was a Lancaster Co., PA sampler when her research may indicate it was a Burlington Co., NJ sampler.
Cynthia has a great wealth of knowledge and provided in a very relatable way.  Cynthia's presentation provided a great deal of in-depth information about each stitcher, what times were like, the area where they lived, their families that Cynthia made the girls come to life for us.  Thank you Cynthia!
*  Photos are courtesy of Cynthia Steinhoff.
Posted by DVHSG at 9:00 AM No comments: