This month, as well as August, were stitch-ins.   While some may not have attended because it was just a stitch-in, it was a nice day to be able to stitch and chat with follow members.   Something we can't usually do at a regular month meeting.

Announcements
Ann S., with the help of Lynn D., has been working on Nominations for our upcoming election of officers.   Our officers have staggered terms and this year we will elect a new President and a new Secretary.    Mary Rita (MR) has agreed to be on the slate of officers in the President's position.   Caryl C. has agreed to continue and will be on the ballot as Secretary.  Elections will be OCTOBER, not in November as originally scheduled.   A few months back, elections we approved to be moved up one month so as to not conflict with the guest speaker and presentation in November.

Conservation Fund
The Committee has received three requests for our 2017 donation towards conservation efforts on samplers.   The Committee is reviewing the three applications and will make a recommendation at the next monthly meeting.

Membership
Our Treasurer reported we now have 110 Members!   Holy Moly is all I can say.   We know some join to be able to take part in Guild sponsored classes.   We welcome each and every member for however long they are with us.

The Membership roster circulated and we were asked to make corrections as needed.   Caryl C. will make all the necessary edits and will distributed the lists at a future meeting.

Salty Yarns  Retreat
Registration and deposit were due September 9th to Stacy.  If you'd like to go and missed the meeting, please  call The Lankford BEFORE 9/15.   This is a MEMBERS ONLY event.

Quilt Show
The Mancuso Quilt Show will be at the Convention Center in Oaks, PA starting on September 14th and will run for four days.   There are many vendors in the market place with tools, supplies, wool, fabric, patterns and more available.   This is all in addition to the traveling display of hundreds are quilts.  It's a great day out to shop and to be inspired.

Class - Lauren Sauer
Next weekend are the two classes with Lauren Sauer.   Each day will start at 9:30 a.m.   Lunch is provided as part of your registration.  It is suggested, you bring lighting and a surge protector.   Outlets in the room are limited so sharing a surge protector will help.   There are about 20 attending each of the classes with many away stitchers joining in as well.

Coming up.....
October - Guild elections and a demonstration on Japanese Embroidery by Pat Lerch.
November - Our November Meeting has been opened to other guilds and because of the number attending, our meeting will be at the Sheraton South.   This Sheraton is location just of I95 south of Wilmington in the Churchmans Marsh area.   Coming north on I95, there is a exit; traveling south, you can access either via Airport Road (behind the New Castle County Airport) or from an I95 exit as well.   (I will do a little reconnaissance and add the exact exit numbers to this post.)
December - Annual Holiday Exchange and Covered Dish Luncheon
January - Show and Tell of stitching related holiday gifts. 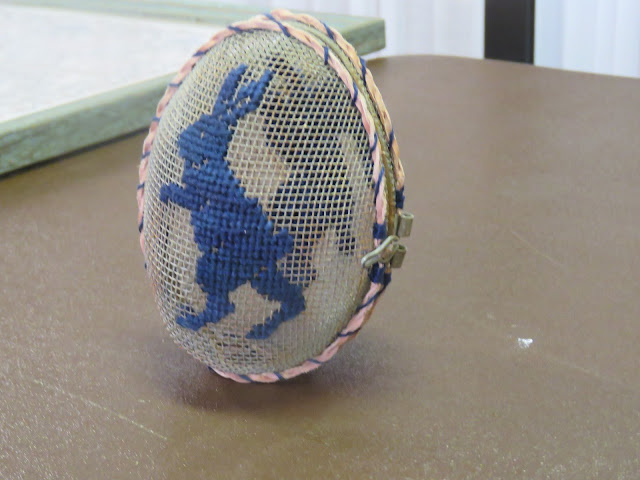 Without me giving it away, I bet most members that attend meetings will be able to guess who stitched this one.   Yes, Patrick.   He has the ability to see the wire egg and stitch an adorable bunny on it.   It was cross stitched in wool.

From Marnie B. some Christmas Ornaments.   The first three are from JBW, followed by two from Little House. 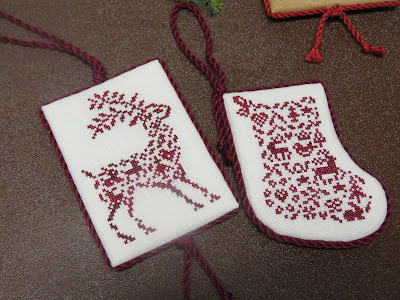 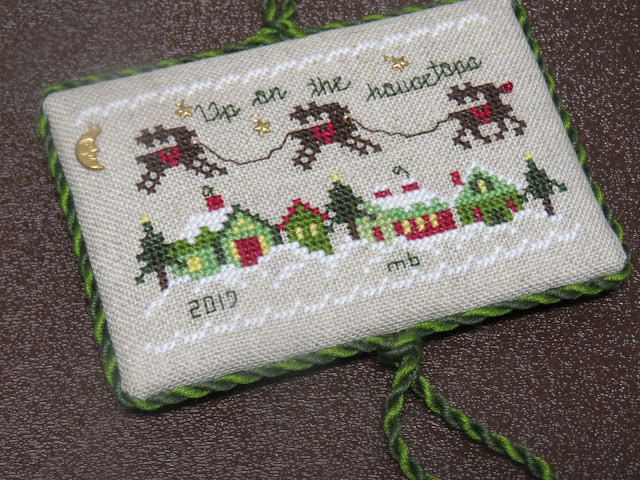 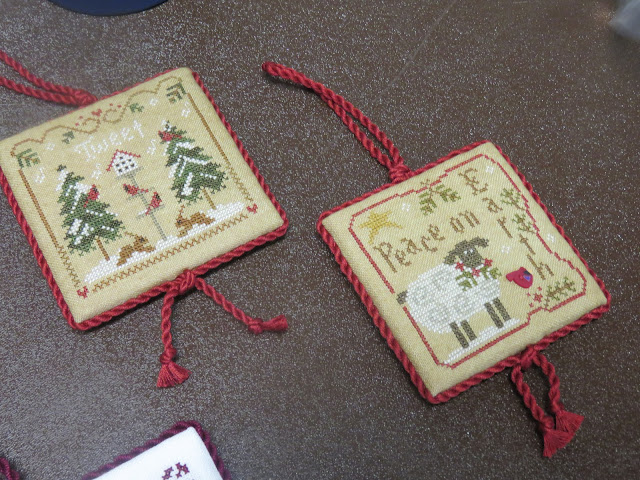 Marnie also stitched and finished this little bunny box from a project kitted up by Evelyn C. 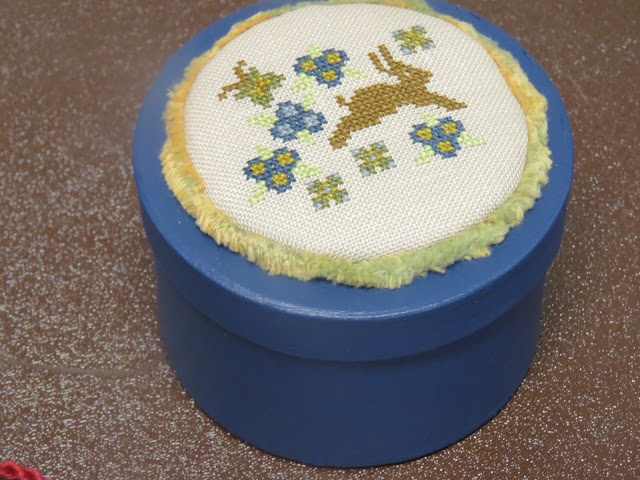 Evelyn C. stitched these.   The violets were part a a challenge.   The Bunny Humbug was too cute as were the other two pieces.   One of which I recognize as a Shepard's Bush. 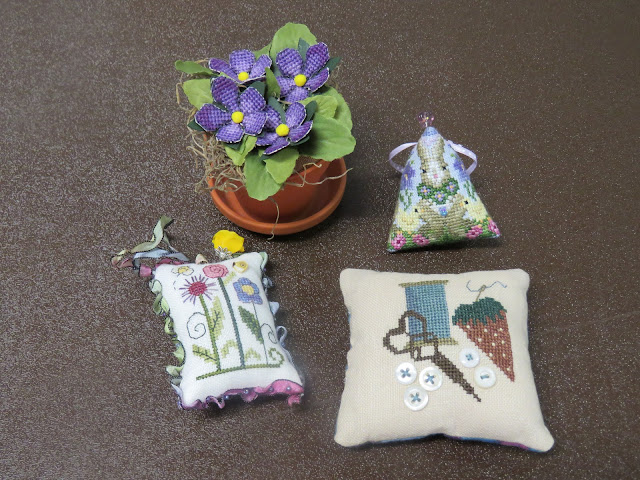 Moulin Rouge from Long Dog Samplers was stitched by Carla. 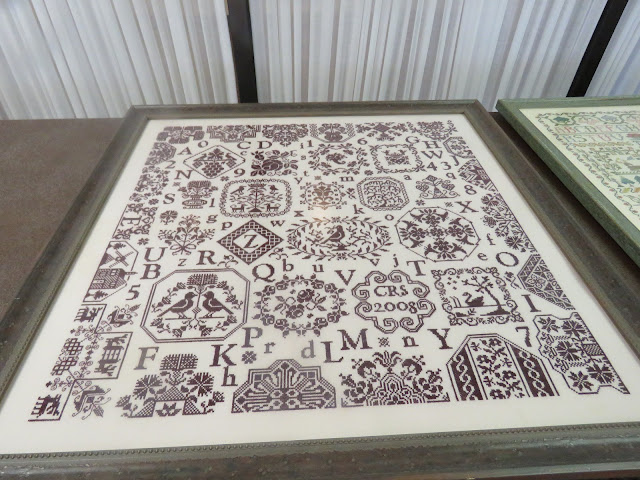 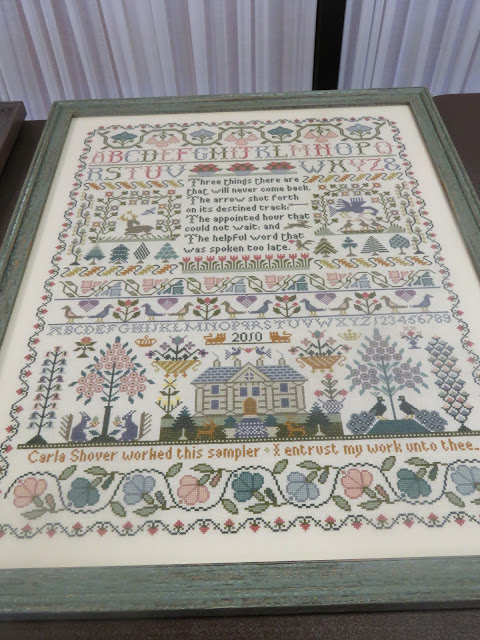 Lisa stitched and framed The Ravens Roost from The Good Huswif. 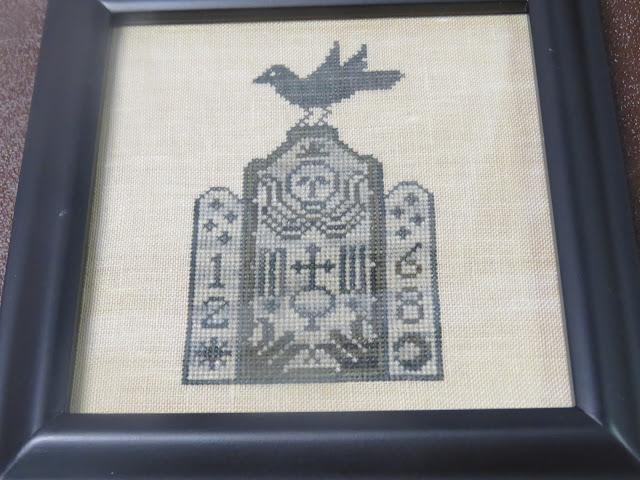 And last but surely not least, Jean T. stitched Rag-a-muffin One from Shakespeare's Peddler. 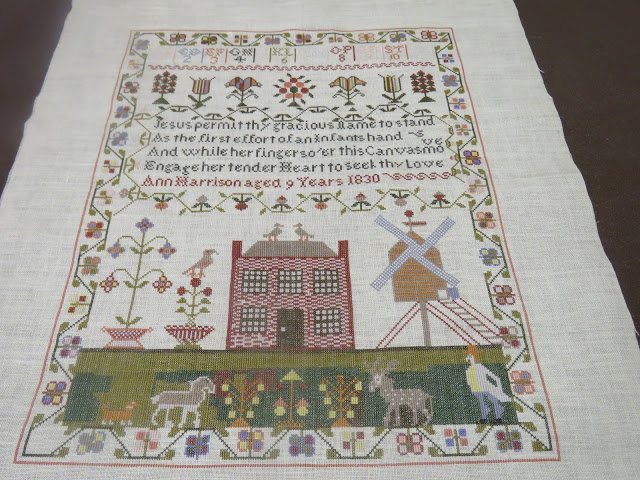 And now for something completely different.  Pat L. shared with us a lap frame she found at a stitching store while in Florida.  Similar to how q-snaps work, this frame sits nicely on your lap or the table.  The name on the clip section is "R and R Crafts" and is available on Amazon in the neighborhood of $50.00.   It is shipped from England arriving in two to three weeks.   Many plan to check it out and possibly order this accessory for stitching. 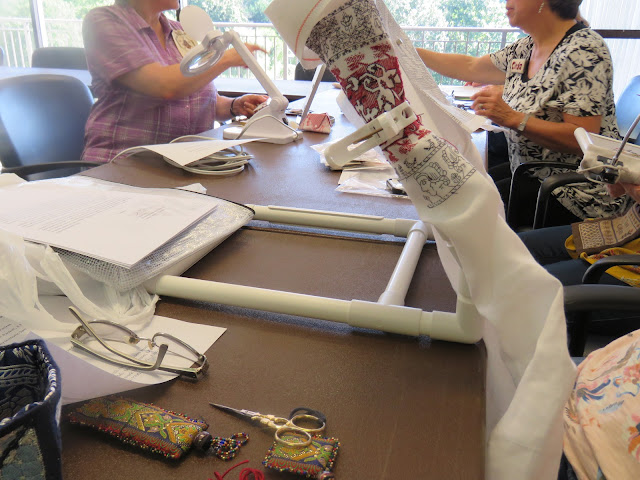 It can be turned around to have either the larger frame on the top or bottom. 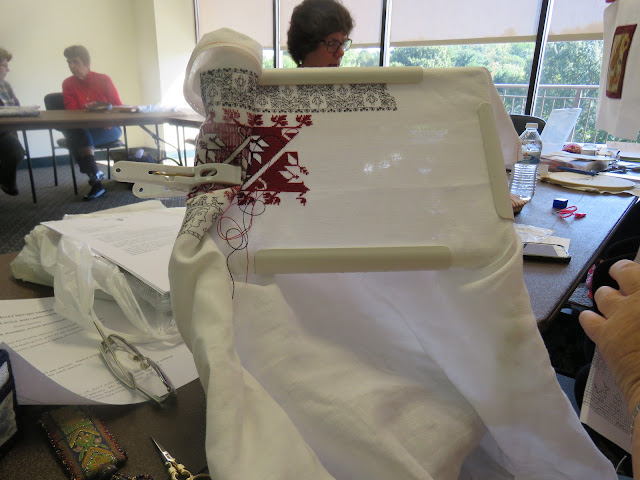 Until next month, keep on stitching.....
Posted by DVHSG at 8:43 AM No comments: